Billie Eilish Vogue cover, a departure from her policy of keeping her body out of spotlight 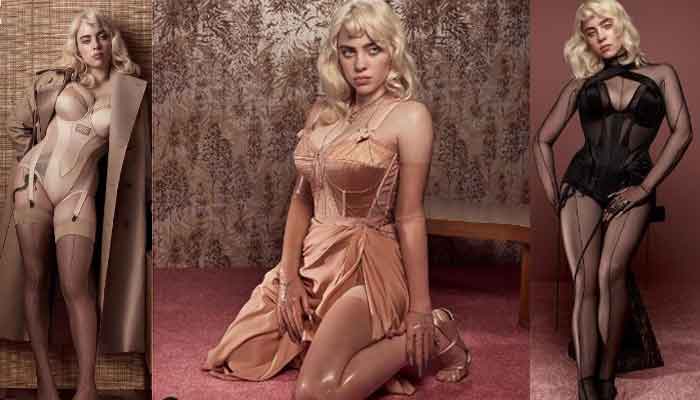 In a departure from her earlier policy of keeping her body out of spotlight, Billie Eilish flaunts “what’s underneath” in British Vogue cover photo-shoot

Billie Eilish graces the British Vogue cover for the June and some of the picture from her shoot for the magazine has already taken the internet by storm.

The teen sensation looked stunning as she flaunted her true beauty in styling season. Apart from showing her curves, the “Bad Guy” singer also unveiled her hidden tattoo on her thigh as she posed in a Gucci corset and stockings for the shoot.

Her latest magazine cover is being seen as Billie Eilish’s departure from her previous policy of keeping her body out of the spotlight.

Answering a question about her baggy clothes she often wore to public events, the singer had said in an interview in 2019 that ““I never want the world to know everything about me, I mean, that’s why I wear big baggy clothes. Nobody can have an opinion because they haven’t seen what’s underneath,” the Bag Guys singer said in Calvin Klein earlier this year.”

The singer shared her latest British Vogue cover photos with some badass captions on Instagram that explain everything behind her decision to show off her assets.

Check out some of Billie Eilish’s British Vogue pictures below: